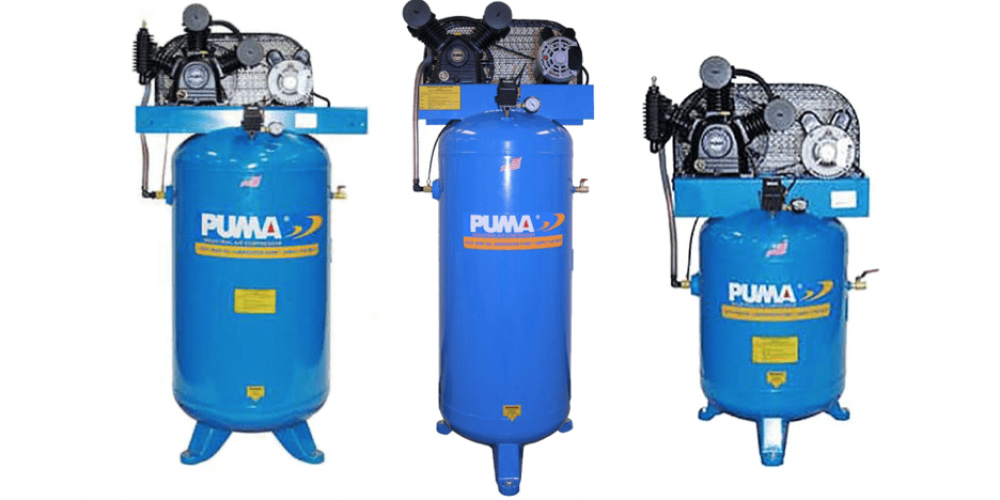 They are not designed to stand up to the continuous industrial use of something like a Quincy air compressor, but the initial investment is often much lower.

If you’re still on the fence about purchasing a Puma air compressor, we’ll help you to understand the potential value of such an investment. We will go over several models in the 40, 60, and 80-gallon sizes.

Puma is a smaller company originally based in Taiwan that has developed a reputation for sturdy but affordable power tools. Puma now has a U.S. branch located in Memphis, Tennessee, and most of the parts for their compressors are now produced in the United States. (source).

Puma has been able to enter the market next to industry giants like Quincy by balancing quality with affordability. They have a reputation for being reliable, running quieter, and running cooler with their solid cast iron pumps.

Puma offers a one-of-a-kind 40-gallon model and really begins to compete in terms of startup costs when you enter into the 80-gallon range. Some of their models can cost around several hundred dollars less than a comparable Quincy model.

This is because Quincy air compressors are specifically designed to lower the cost of ownership over the life of the compressor. If the air compressor will be constantly running, you will want something highly energy-efficient that produces the most air while drawing the least amount of power.

If you own a shop or garage and you’re going back and forth between the compressor and other tools, you will not be as concerned about such operating costs. The fact that they’re ASME or CRN certified also means they’re a great choice for light commercial use.

A compressor with a 40-gallon tank will be just fine for brad nailers, framing nailers, impact wrenches, small plasma cutters, powder coating, and light spray painting. However, for sandblasters, grinders, and sanders, you’re going to need a higher capacity tank.

Larger tanks will also be handy for serious automotive enthusiasts who wish to paint more than just a small panel of their vehicles.

Puma pumps are of the typical belt-driven variety with a large flywheel, and they come in single-stage or two-stage types. A two-stage compressor with two cylinders uses the piston in one cylinder to push air into the second cylinder as a way to increase the pressure (source).

One advantage of the two-stage system is that an intercooler can be added to help decrease the temperature of the air it produces. Like Quincy, Puma compressors have copper, finned intercooler and aftercooler lines that help remove heat as well as moisture.

While the aluminum helps to dissipate heat and resist rust, it also decreases the strength of the cylinder head.

Like most air compressors, Pumas are generally oil-lubricated, articulated-piston compressors. The bearings and cylinder walls are splash-lubricated as the crank rotates by dipping into an oil bath. You can view the oil level by simply checking the sight glass on the pump.

The downside of this is that some of the oil inevitably gets into the air supply. Oilless models are available for applications where air purity is a major concern like applications with food, electronics, textiles, and spray painting.

The amount of power going to your tools is measured in cubic feet per minute (CFM), and it’s important to distinguish between CFM for actually delivered (FAD for Free Air Delivery) air and CFM for displacement (source).

CFM is an area where Puma tends to fall a little short of Quincy models. Quincy boasts the highest actual cubic feet per minute (ACFM) per brake horsepower (BHP) on the market, producing more air while consuming less energy (source).

Puma compressors use WEG induction motors produced in the United States, though WEG is based in Brazil (source). Quincy compressors, on the other hand, use U.S.-made Baldor motors. Should the motor go bad on you, they’re a little less expensive to replace on a Puma.

For 40- to 80-gallon tank model Pumas, the tank outlet is a ½ inch ball valve compared to ¾ inch on a Quincy unit. The ball valve for the extended manual drain is ¼ inch.

They can run off of a 220/240V outlet with the 3 horsepower model drawing as little as 15 amps, while the 6.5 horsepower model draws as much as 24.5 amps of power. Most of these come with a combination pressure switch starter rated at 30 amps, although some have the option for a magnetic starter (source).

The Puma 40-gallon models are really in a class of their own since many other 30 or 40-gallon compressors are either of the gas-powered truck mounting variety or of considerably lower horsepower. These would make an excellent backup supplementary unit to a larger industrial model.

One of the closest Quincy models that you could compare it to would be the Quincy QR-25 series models V210 and F210 with a 30-gallon tank, 1 HP motor, 2-cylinder pump, and about 5 CFM at 100 PSI while weighing roughly the same (source).

You can also get a 60-gallon model with a little more capacity using the same amount of horsepower as the 40-gallon models. Puma has a few single-stage 60-gallon models that are similar in price to comparable Quincy models.

The Puma weighs a little more at 305 lbs while the Quincy weighs about 261 lbs, and the Quincy has a duty cycle listed at 50% with a pump life of over 10,000 hours. The Puma’s duty cycle is not listed.

You can find them at similar prices, and you may be able to catch one or the other on sale.

Puma also makes the 5 horsepower PK6560V. This has a single-stage pump compared to the highly-rated two-stage, 5 horsepower Quincy QT-54 60-gallon model. The motor actually draws fewer amps at 19 to 20 instead of 24 amps while both run at 3450 RPM.

An 80-gallon tank is a must if you want the capacity to do a full automotive paint job or to operate tools like sandblasters. This is where the potential value of a Puma really comes into play.

Puma produces several 80-gallon models, ranging in horsepower from 5 HP to 10 HP, and some of these cost considerably less than a comparable Quincy model.

These have prefixes like TE, TN, TUE, and TUK, indicating differences in some of their features. For example, TE models all use three-cylinder radial pumps and don’t come with magnetic starters.

The TN models tend to have two-cylinder V-style pumps and magnetic starters. All of the TN, TUK, and TUE models have magnetic starters for heavier loads, and most of them run at a lower RPM of 1740 or 1750, depending on whether they’re single-phase or 3-phase.

As far as longterm performance goes, the Quincy is still the better model. But for light commercial use, the Puma offers a significantly lower start-up cost that many will find worth it for the extra tank volume.

With a little more horsepower than the Quincy QT-5 Pro and the Puma TE-5080V, it comes closer to the QT-5’s CFM at 175 PSI at 16 while still being several hundred dollars cheaper.

The single-phase TUK-7580VM runs off of 40 amps, which is comparable to the single-phase QT-Max or QT-Pro that draw about 40 amps and runs at 1725 RPM. The price difference between these Puma and the Quincy models can be as high as around  $700.

Puma air compressors are ideal for DIY shops and are ASME certified for commercial use. While not as energy-efficient as the industry-leading Quincy compressors, they have a reputation for running cooler with less noise.

The Puma TE-5040V is a very popular 40-gallon model that will cover a wide array of applications while being very compact.

Puma’s 80-gallon models like the 5 horsepower TE-5080V or the 7.5 horsepower TUK-7580VM provide a great value for those who don’t require a compressor that’s constantly running. If you’re able to sacrifice a little CFM and don’t require the same running time, a Puma air compressor might just be a wise investment for you.

We use cookies to ensure that we give you the best experience on our website. If you continue to use this site we will assume that you are happy with it.

NOTE: These settings will only apply to the browser and device you are currently using.