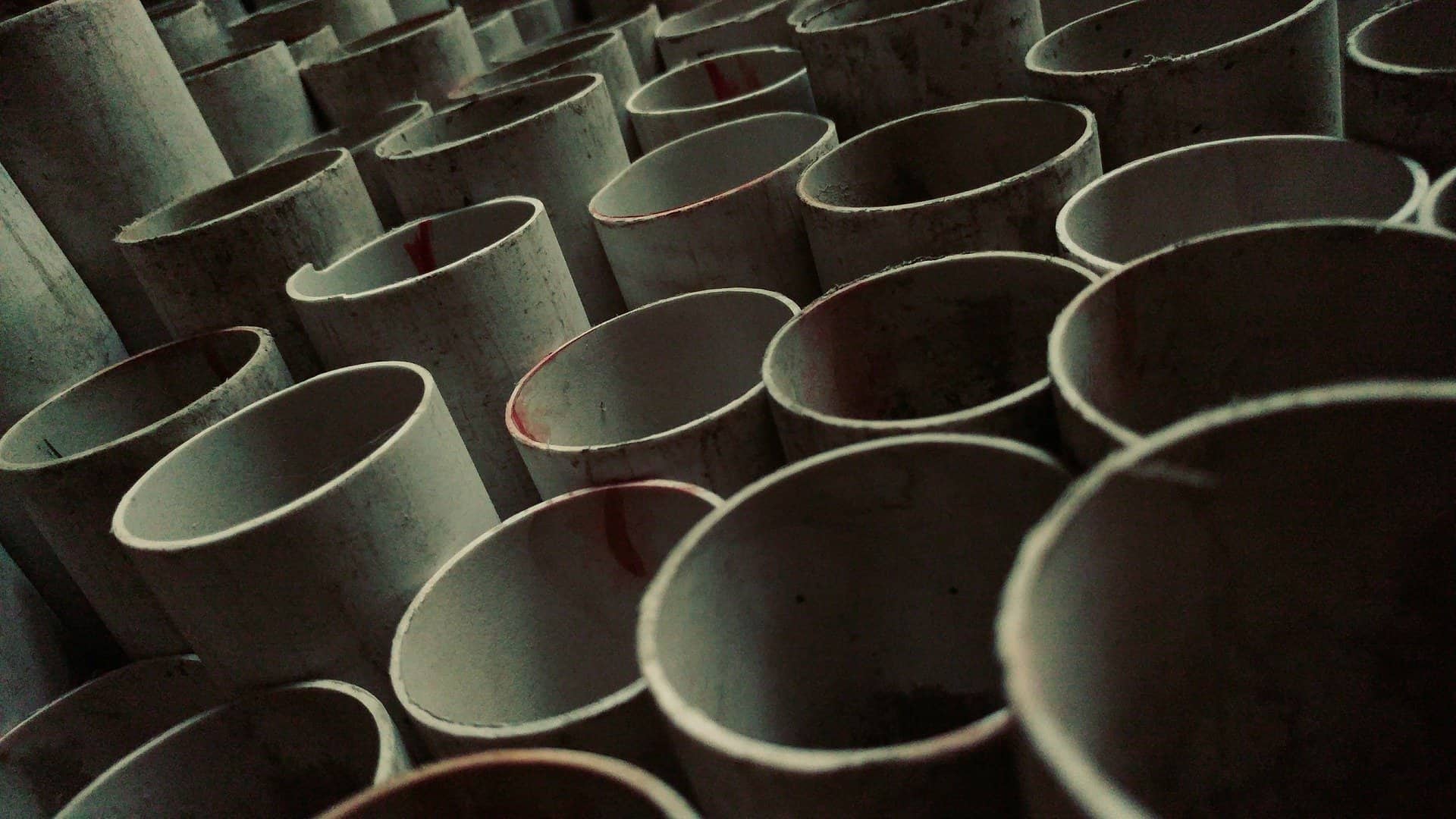 When working with PVC plastic and concrete, sometimes we want the PVC to adhere to the concrete. And other times, there is a strong desire to have the PVC not stick to concrete. Before one begins, it is likely to be asked, ‘Does Concrete Stick To PVC Pipe?’

Keep reading to find out more about both concrete and PVC pipe. We’ll start with a few basic questions about working with the two substances and move into a more in-depth look into how these two materials are made and how they react with one another.

How Do You Keep Concrete From Sticking To Plastic or PVC Pipe?

If keeping concrete from sticking to plastic is the goal, there are several techniques one can use to achieve this eventuality.

Preventing concrete from sticking to plastic is accomplished by greasing, oiling, or waxing the plastic. Many contractors recommend petroleum jelly or grease to coat the plastic before contact with wet concrete.

The sure-fire way to keep fresh concrete from sticking to plastic is to coat the plastic in something that repels water. The only other solution is to use a specially formulated concrete form release agent.

Many of the specially formulated release agents are paraffin-based formulations. These formulas, generally considered for larger-scale applications, usually require some form of a particular application. Often utilizing a pressure sprayer to apply to large forms before a pour, the paraffin-based formulas work very well to keep concrete from sticking to forms and plastic.

How Do You Keep Concrete From Sticking To Plastic Molds?

As mentioned above, it isn’t impossible to maintain loose relations between concrete and plastic. And a plastic mold is no exception. So, does concrete stick to PVC pipe like it does a plastic mold? Well, let’s talk about how to stop any sticking.

To keep concrete from sticking to plastic molds, lubricating the mold with grease or petroleum jelly products such as Vaseline has been successful. This application of grease or similar product maintains an oily barrier between the wet fresh concrete and the plastic mold.

There are several different techniques that people have used to prevent fresh concrete from sticking to forms such as plastic molds. As we’ve already mentioned, oil and grease are excellent hydrophobic substances that will repel the water of fresh concrete.

However, it isn’t just oil and grease that repel water. Wax also works very well to repel water. Applying wax to the Plastic molds, before pouring concrete, helps prevent the concrete from sticking to the mold.

What Material Does Concrete Not Stick To?

When working with concrete, it is essential to use materials that concrete will not stick to when curing. However, when wet concrete has a tenacious ability to stick to nearly anything—nearly being the operative word.

Some concrete experts have recommended wax for forms as an alternative to grease or oil. Wax tends to work well with wooden forms as the voids in the wood are perfect for trapping small amounts of wax. It prevents water from entering the form between wood fibers. It also acts as a buffer to help prevent the concrete from adhering to the wooden form.

Using concrete and PVC pipe together is a common occurrence in the building trades. However, many wonder if the PVC pipe will face damage by concrete.

Concrete does not generally damage PVC pipe unless cracking and shifting of the concrete occurs. However, the PVC pipe embedded in concrete may damage itself due to expansion and contraction differences between the concrete and PVC.

Temperature changes such as running hot water in a PVC pipe embedded in cold concrete can cause the expansion pressure of the PVC pipe to distort and even fracture the pipe within the concrete.

How Do You Stick Pvc To Concrete?

If you’re working with PVC and concrete, sometimes the goal is to adhere the two together. Using polyvinyl chloride pipe with wet concrete will be okay to have the two bond; if embedding the pipe in fresh concrete. But, what if you are trying to stick PVC to cured concrete?

Polyurethane adhesives work the best to adhere to PVC to concrete. That is to say, aside from mechanical means.

More About Concrete And Pvc

We’ve covered a lot of the common questions about concrete and PVC. We’ve discussed how the two may stick, how to prevent sticking, and a bit about what sticks to concrete and what doesn’t.

Well, perhaps we should dig a little deeper to understand a little more about how concrete and PVC each work, what they are made of, and how this could affect their interactions.

Concrete is a building material that is comprised of three essential ingredients. These are water, aggregate and Portland cement to act as the binding agent.

What Is Portland Cement Made Of? Does it make concrete stick to PVC pipe?

Portland cement, the most common form of cement used by humans, is generally formed of the following ingredients.

These components are mixed in a specific way to create Portland cement. Now, the question arises of how we can make something so substantial for building out of these simple ingredients.

How Portland Cement is Made

Here is the super-abbreviated version of how Portland cement is made.

Portland cement is created by using limestone and a mixture of clay and minerals. These elements are heated in a cement kiln to incredible temperatures, often exceeding 2,640 degrees Fahrenheit.

The heating process creates a new material called clinker. This clinker is then ground up, and gypsum is added. The gypsum usually comprises about 2 to 3 percent of the mixture.

It is this process that creates the adhesive like material known as Portland cement. It is this substance that sticks to the PVC (although not a great bond).

Getting wet cement on your skin can cause chemical burns. Have you ever seen the movie Fight Club? Okay, so it isn’t that extreme by any means, but it can cause severe skin reactions and even potential hospitalization for extreme cases.

Portland cement is also extremely dangerous for the lungs when it is in powder form. The dust is easily airborne with a little help from a breeze or disturbing the finely ground powder. The dust can cause severe reactions within the lungs and has even been found responsible for lung cancers.

It is strongly advised to wear the proper protective equipment, including gloves, respirators, and eye protection when working with powdered or wet cement.

PVC, or polyvinyl chloride, is, according to Wikipedia, the third most widely made synthetic plastic polymer. The only two that beat out PVC are polyethylene and polypropylene.

There are two common forms of PVC used in the industry. There is a rigid type commonly found in use for making pipe, and other rigid applications such as window framing.

For most construction projects, it is the rigid variety of PVC used. It is the form of PVC we concern ourselves with when discussing concrete adherence.

How Does PVC React With Concrete?

PVC and concrete do not generally react with one another. Although concrete (cement) is caustic when wet, it doesn’t stay wet for long enough for a significant chemical reaction to take place. So, does concrete stick to the PVC pipe due to a chemical reaction? No, thankfully it does not.

Some concerns have been raised online about the heat that concrete gives off when curing, and whether it can distort the PVC pipe embedded within the concrete. There is some speculation that it may be possible, but no real evidence presents itself to suggest it is a common issue.

As mentioned earlier, the PVC pipe has a much higher range of thermal expansion than does concrete. And it’s a good thing too. Otherwise, our tall concrete buildings would collapse to the ground.

The main concern about thermal expansion comes when considering using PVC for hot water. If running hot water in a PVC pipe, the pipe will naturally want to expand. However, the surrounding concrete will not expand so readily. And certainly not with the PVC pipe acting as a partial insulator to trap the heat from transferring into the concrete.

Imagine what happens when a rigid PVC pipe, already under the pressure of cured concrete, now faces a thermal expansion problem. The pipe can shear, deform, and even rupture. If embedded within concrete, a pipe break is not an easy repair to bring to the task.

And for that reason, most tradespeople agree that embedding PVC within concrete isn’t a great idea.