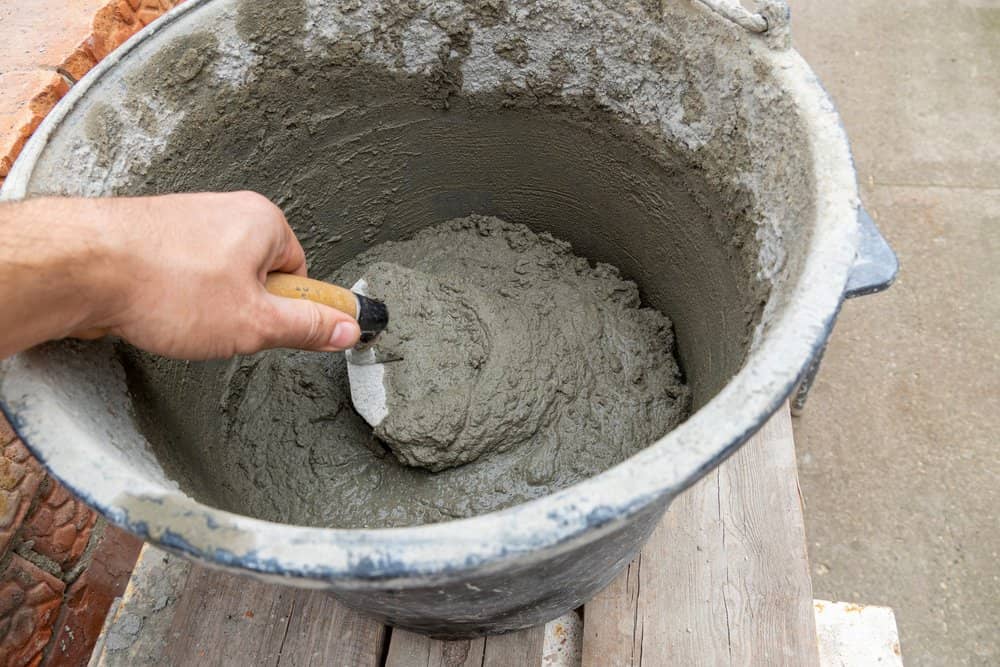 If you’ve ever mixed cement, in particular Portland cement, and left some in the pail, you know how well it sticks. And depending on the amount, you may or may not be able to remove it quickly.

Concrete, or rather Portland cement, the ‘adhesive’ part of the concrete, sticks very well to plastic buckets. Treating forms, pails, and other materials with a release agent will help prevent unwanted concrete from sticking to your bucket and other tools.

Cement, the portion of concrete responsible for binding the materials together, is not an overly sticky substance. Cement often won’t stick to materials, and a bonding agent is required to make new concrete adhere to existing concrete. (source)

Concrete does not adhere well to the following materials.

Will Concrete Stick To A 5-gallon Bucket?

Concrete will often be mixed or transported using a 5-gallon pail. There are multiple videos online portraying the installation phase of concrete. A large percentage of these instructionals show the use of a bucket at one point or another during the concrete pouring project process.

Concrete will stick to most 5-gallon buckets constructed with HDPE (High-Density Polyethylene). Coating the bucket with an oil-based release agent prior to contact with wet concrete is an effective way to prevent adhesion.

Not all plastics allow concrete to stick well. HDPE plastic does allow sticking, but some other forms of plastic that are siliconized or rubberized do not allow for adhesion as HDPE does.

How Do You Keep Concrete From Sticking To The Plastic Bucket?

When you’re using a pail to mix or transport wet concrete, it’s best to ensure that the concrete doesn’t stick to the pail. That is if you ever intend to use the pail again. Perhaps you’ve got a garden hose ready, and you’re prepared to blast off any wet cement before it cures. Or maybe you don’t have a hose available for such a task. In this case, knowing how to prevent the concrete from adhering to your plastic bucket is essential.

Using formal release agents or even oil-based lubricants such as Vaseline to coat a plastic bucket surface before exposure to wet concrete will help prevent any concrete adhesion to the pail.

We’ll dive in deeper to release agents further into this post.

What Materials Does Concrete Not Stick To?

Working with concrete is not without its issues. And this is the case when you are dealing with materials that you don’t want to have concrete sticking to. As discussed early on in the article, there are several materials that concrete does not stick to.

Materials That Concrete Will Not Adhere To

Smooth, non-porous surfaces such as glass can often withstand adhesion but are not recommended for wet concrete as the stones can break the glass.

How Do You Make Concrete Not Stick?

Let’s say you’ve got a concrete project, and you want to build some custom wood forms. Likely, you’ll wonder whether or not the concrete will stick to your forms. It would be a shame to remove the forms to see all kinds of fragments of wood imbedded in your new concrete after all.

To stop concrete from sticking to another surface, a release agent is often employed. Release agents are chemicals used to prevent adhesion of curing concrete to items such as forms or other materials.

How Do You Make Concrete Stick?

So, we’ve talked about a few materials that concrete won’t stick to. These can even include existing concrete! But what if your goal is to have the concrete stick to something?

When pouring new concrete, if adhesion to an existing surface (such as existing concrete) is required, the use of a bonding agent will be required. Likewise, further physical anchoring may also be needed.

When you need concrete to stick, like when trying to pour onto existing concrete, it’s best to ensure a thick enough layer of concrete that it won’t simply form a skin that could crack and flake off.

If using thicker amounts of concrete, not only using a bonding agent is wise, but also including metal tie-ins such as wire mesh or even rebar installed into the existing concrete will help maintain a good connection between new and old layers of concrete.

Will Quikrete Stick To Plastic?

Quikrete is a fast-setting brand of concrete that is sold in hardware stores across North America. The fast-setting form of concrete is often mixed in a 5-gallon bucket made of HDPE plastic.

Quikrete also boasts a shorter curing time than standard concrete. This means that you have even less time to get your tools and equipment, like a plastic pail, clean before the concrete cures.

What Is The Best Release Agent For Concrete?

When you’re trying to keep curing concrete from adhering to its surroundings, a release agent is your best defense. However, depending on the materials involved, different types of release agents may be best.

For releasing concrete from wood forms, the best release agent used by professionals is an oil-based agent. Many professionals swear by the use of Vaseline to coat their wooden forms.

For larger commercial projects, the application of commercial form release via a pressure sprayer is utilized.

There are two primary forms of release agents: barrier and chemically activated.

Chemically activated release agents are usually made with some form of fatty acid. If you’ve ever made soap before, this process might be familiar. The fatty acids react with calcium ions in the concrete to form a soap-like layer. This layer acts similarly to the barrier agents by producing a layer that the curing concrete can not adhere to. (source)

Can You Use Pam As A Mold Release?

Pam is a canola-based cooking spray that first hit the market in 1961. The product, produced by Conagra Foods, was initially intended to help stop foods from sticking to baking pans and the like. (source)

As Pam is an oil-based spray, it can be used as a concrete release agent. The convenient aerosol spray can make application easy for smaller surfaces.

Although Pam dropped out of favor in the 1990s, the product and similar products are still easily obtained at most grocery store chains.

For use on smaller forms, pails, buckets, or similarly smaller sized tools and materials, cooking sprays such as Pam are convenient and cost-effective. However, on larger-scale projects, the use of an aerosol cooking spray becomes more trouble than it’s worth. In these situations, a more commercial or industrial release agent with a pressure sprayer is a more efficient solution.

Some forms of plastic are worse for concrete sticking. HDPE plastic, used to make standard 5-gallon pails, allows concrete to stick to it. Although relatively easy to remove, if only a thin layer is left to dry, a full bucket of concrete will be tough to separate from the pail.

Using release agents to prevent concrete adhering to your bucket is a common practice for concrete workers. However, many form release agents are not made with environmental consideration in mind.

Many professional concrete workers like using food-grade oils such as cooking oil to use as a release agent. Any oils work well, and food-based oils are biodegradable and thus environmentally friendlier than chemically activated release agents.

Whatever the product or substance used, the best release agents are oil or waxy substances that repel water.