What Is The Freezing Point Of Gasoline? (Surprising Answer)

While only the refiner will know the exact composition of your gasoline, you can determine a rough freezing point based on the general composition of the fuel that you select. Aside from the choices of regular, unleaded, premium, or diesel, the composition can also vary regionally and with the seasons.

At what temperature does gasoline freeze? Gasoline freezes at temperatures between -40°F and -200°F (-40°C and -129°C). The exact temperature depends on its octane level, whether or not it contains ethanol, and what hydrocarbons are in the fuel. When frozen, gasoline turns into more of a gel-like substance than a block of ice.

The Freezing Point of Hydrocarbons 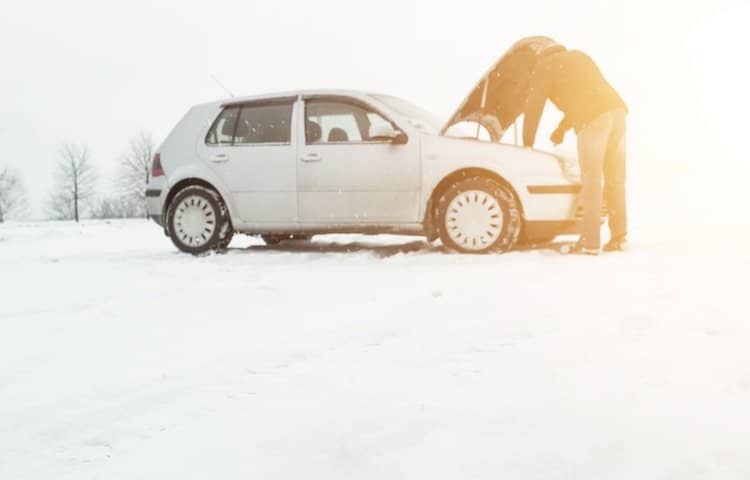 Heavier hydrocarbons solidify sooner than aromatic hydrocarbons. Heavier, thicker hydrocarbons, such as paraffin or alkane in diesel, turn to a solid at atmospheric temperatures. Some aromatics require temperatures of -129°C to -184°C (-200°F to -300°F) to solidify (faqs.org, 2004).

Freezing usually involves a change in the structure where the molecules form orderly crystals. The molecules in gasoline just slow down at low temperatures and remain disorderly and more gel-like. However, if cooled slowly enough some hydrocarbon crystals form (Ask the Van, 2007).

The most common octane ratings are from 85 to 93 representing the fuel’s Anti-Knock Index. This provides a reference to measure how much pressure and heat it requires for fuel to combust. Again, the variation in octane rating is caused by fuel additives used to reduce the risk of pre-detonation or knocking and avoid damaging the engine (Santner, 2019).

The recommended rating for the majority of vehicles is 87 octane. The occurrence of pre-detonation of 87 octane gas is more likely than 91 octane because it ignites at a lower temperature (Joan, 2012).

Regular and unleaded gasoline have lower octane levels (85-87) than premium (91). The remaining elements in the fuel are formulated to help clean your engine or prevent knocking/pre-detonation (Advanced Technology Institute, 2017; Santner, Z., 2019).

The Freezing Point of Unleaded Gasoline 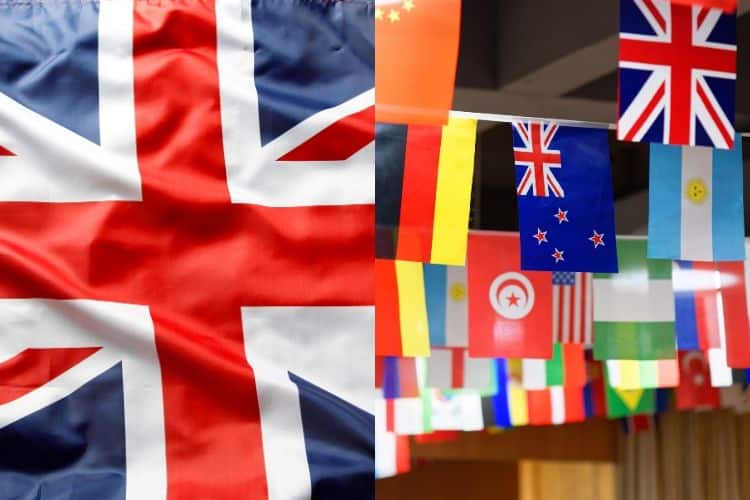 Petrol is the United Kingdom and Commonwealth countries’ equivalent to American gasoline. As such, it has the same properties and freezing point as gasoline. Regular petrol in the UK is sold at an octane rating as high or higher than mid-grade in the US (RON 95 or AKI 90). Instead of octane being rated at the Anti-Kock Index (AKI), it is rated with a compression ratio called the Research Operating Number (RON). With its higher octane content, petrol is nearly impossible to freeze during the harshest winters in Britain.

Some gas stations advertise the sale of “ethanol-free oil” also referred to as “pure oil.” There is an ongoing debate regarding whether gas made of 100% ethanol, 100% gasoline, or some mixture is best (Regoli, 2016).

The advantages of ethanol-free gas are:

Freezing Point of Gasoline with Ethanol 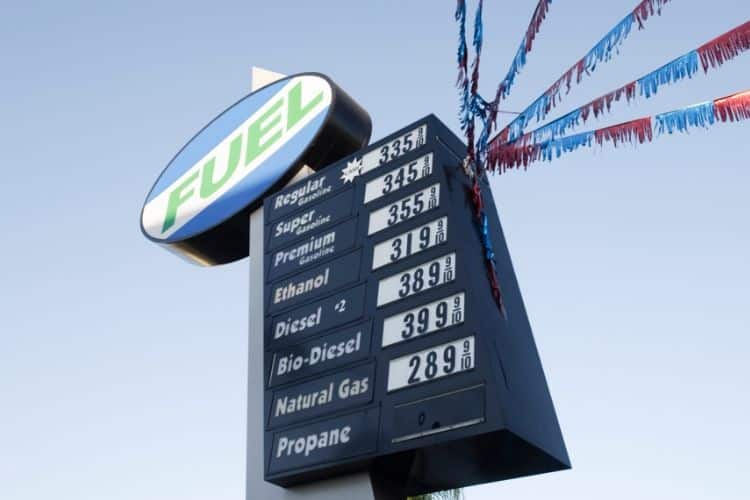 Biomass produced ethanol is favored as an alternative fuel for gasoline engines due to its high octane number and lower emissions (Bahattin Celik, 2008). Various types of alcohol can increase your octane rating. Ethanol has a very low average freezing point of around −173.45°F (−114.14°C). Various mixtures of gasoline and ethanol are available such as E10, E25, 350, and E100 representing the percentage of ethanol (Bahattin Celik, 2008).

Methyl alcohol or methanol (−143.7°F or -97.6°C) is another form of alcohol additive commonly used to keep gas from freezing when temperatures are very low. Isopropyl alcohol (−128°F or −89°C) is also a suitable additive. One of the downsides to ethanol is that it can clog your carburetor (Cannon, 2019).

Due to the fact that it is hygroscopic, ethanol attracts the water in your fuel and prevents precipitation and ice formation below 32°F. Despite this, ethanol does not mix with water but will mix with gasoline. Instead of bonding, the molecules of ethanol fill in the spaces in between the larger water molecules. Water will sink to the bottom of your gas tank and with some of the ethanol still trapped in it.

If oxygen is introduced into gasoline that has water and ethanol in it, you will end up with rust. Another result of having ethanol draw water into your tank is that the fuel pump will draw water from the gas tank bottom and into your engine. As a result, the engine dies so that it costs you a pretty penny to have it dried out. The usual fix for storing ethanol fuel is adding a stabilizer that contains a high isopropanol concentration. It forms an azeotropic mixture with water. As isopropanol evaporates, the water goes with it (KeithS, 2013).

How to Keep Gasoline from Freezing

Since gasoline freezes somewhere below -40°F to -58°F at the most, it is generally not gasoline in a vehicle that freezes. Water freezes at only 32°F, and water vapor in the system or fuel line is more likely to freeze (Cannon, 2019).

Make sure the fuel line has no leaks since empty space in the lines can cause condensation. Keep the tank as full as possible to reduce the risk of condensation and to maintain a higher overall temperature in the tank (Cannon, 2019). A treatment called dry gas will keep the water in the fuel so that it burns off.

If your lines are already frozen, a warm garage is the best solution. Make sure to keep gas cans away from direct exposure to any major source of heat. You can also purchase fuel line antifreeze treatments that work within a few hours (Cannon, 2019).

Can Gas be Frozen and Used Later?

In extreme temperatures, coagulation and crystallization of some elements in gasoline occur. When it thaws, it is again usable, but freezing has the potential to cause a permanent chemical change in gasoline. Instead of a block of ice, the gas turns into a gel-like substance when it freezes (Cannon, 2019).

Stay away from using the gasoline until it warms a bit. If it is in a container, thaw the gas by putting the can in an enclosed place that allows it to get above -45°F (-43°C), but where you won’t be affected by any fumes, such as your basement or garage. Use a sealed container to prevent the spread of such dangerous fumes (Cannon, 2019).

Due to the presence of alkane or paraffin in Diesel, the fuel is has a tendency to gel or wax in cold weather. An alkane is a saturated hydrocarbon, and hexadecane or cetane is a highly viscous alkane used in diesel. Instead of octane level, diesel is measured by its cetane level. Below what is referred to as the cloud point, particles of solid wax begin to form in the fuel under colder conditions.

The buildup of wax in the fuel will eventually clog up the filters and injectors. The CFPP (Cold Filter Plugging Point) is a measure to determine the diesel fuel flow rate through a filtration system device. This takes into consideration the time and temperature. Summer diesel may have a CFFP of 23°F to 19°F (-7°C to -5°C), while winter diesel may have a CFFP of 5°F (-15°C). Most diesel vehicles have heated filters that allow the vehicle to function under even colder conditions (Winter diesel fuel, 2019). An engine block heater is used to keep the battery warm and prevent the oil from thickening.

The flash point of gasoline is the temperature at which the vapors ignite. This can also be defined as the lowest temperature necessary for fluid to form a concentration of gas that is combustible. In the case of gasoline, the flash point is -45°F (-43°C) (Ukropina, 2014).

Since gasoline is composed of various chemicals, the freezing point of gas can vary considerably. Elements of water or alcohol in your gasoline will freeze much sooner than some hydrocarbons, especially aromatic hydrocarbons. As a result, estimates for the freezing point of gasoline be as high as -40°F to -58°F (-40°C to -50°C) and as low as -200°F (-129°C) (Ask the Van, 2007).

Gasoline blends vary in the area of the world and the time of year. They are formulated differently to withstand the cold temperatures in winter or the dog days of summer. The very low temperature required to freeze gasoline makes the occurrence of solidification or gelling unlikely. In most areas, water in your fuel lines will freeze well before gasoline does.

To prevent your fuel lines from freezing, keep your vehicle stored in a warm location and don’t allow your fuel level to get too low. Storing gasoline in a standard gas storage container is safe, and if your gasoline does freeze, be sure to thaw it thoroughly before attempting to use it. Specially formulated antifreeze treatments are available if gasoline does freeze in your vehicle. However, unless you live in an exceptionally cold area, this is not likely to be a concern for you.

Advanced Technology Institute (2017). Unleaded vs. Premium: What Is Really the Best Gas to Use? Retrieved from https://www.auto.edu/blog/unleaded-vs-premium-what-is-really-the-best-gas-to-use/

Cabrera, Y. (2017). There’s still lead in your unleaded gasoline — and it may be putting kids at risk. ThinkProgress. Retrieved from https://thinkprogress.org/theres-still-lead-in-your-unleaded-gasoline-f0124ebdcb17/

Cannon, K. (2019). Will Gas Freeze In A Gas Can? Everything You Need To Know. Motorcycle Habit. Retrieved from https://motorcyclehabit.com/will-gas-freeze-in-a-gas-can-everything-you-need-to-know/

Joan, B. (2012, July 4). 87 and 91 Octane Gas. Retrieved from http://www.differencebetween.net/technology/industrial/difference-between-87-and-91-octane-gas/

KeithS (2013, May 10). Re: Is there a point at which Ethanol (E10) fuel becomes harmful to gas tanks or engines if not used? [Msg 15]. [Online forum comment]. Retrieved from https://chemistry.stackexchange.com/questions/4270/is-there-a-point-at-which-ethanol-e10-fuel-becomes-harmful-to-gas-tanks-or-eng

PrevPrevious PostIs Welding Hard? (Straight Answer, Plus Info To Know)
Next PostSandblasting Vs Soda Blasting: What Are The Differences?Next