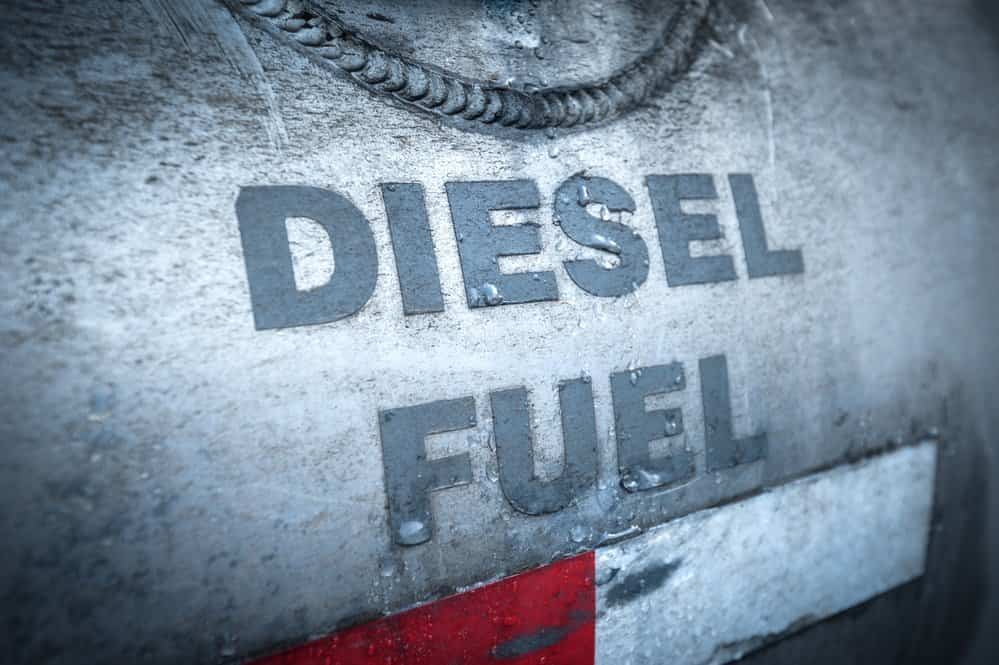 Gross vehicle weight is regulated by both state and federal law on the highways, so trucks and commercial vehicles are subject to inspection at weigh stations. A key factor for many vehicle operators in complying with such laws is calculating their fuel weight.

While the differences might seem minor, this adds up quickly in large rigs with tanks that hold anywhere from 100 to 300 gallons of fuel. In this article, we will review the factors that contribute to diesel’s overall weight.

The Average Weight of Diesel Types

The three main classes of diesel are number 1 (1-D), number 2 (2-D), and number 4 (4-D) with differing viscosities and pour points. The main standard for diesel fuel oils in the United States is ASTM D975, while the European Union and many other nations go by EN 590.

Number 1 diesel is used primarily for cold weather conditions and has a lower viscosity. It is ALSO chemically very similar to kerosene. The Engineering ToolBox reports the density of number 1 diesel at 54.6 lb/ft3 at 59°F (15°C). Converted to pounds per gallon, that comes to about 7.3 pounds per gallon—a little higher than number 2 diesel (source).

The most common form of diesel for normal and warm weather conditions is number 2 diesel, which has a higher viscosity than number 1 diesel.

The density of 2-D diesel is reported at 53 lb/ft3 or 7.09 pounds per gallon at 59°F, but standards have been moving closer to those of the European Union EN 590 as of late in parts of the US.

In the New England and the Mid-Atlantic States, a gallon of number 2 diesel fuel now weighs between 6.96 lbs and 6.91 lbs within the room temperature range of 59°F to 76°F. At colder temperatures like 32°F, a gallon of diesel will weigh about 7.05 lbs.

Diesel expands in warm weather and at very high temperatures like 110°F, a gallon of diesel will weigh about 6.8 lbs. These numbers are based on an average density of 51.84 lb/ft3 for diesel, reported by AVCalc LLC, a company based in New Jersey (source).

The European Standards Organization (CEN) requires the density of diesel to fall within a certain range. The current standard, EN 590, was introduced in 2005.

Number 4 diesel is for low-speed and medium-speed engines that run at a relatively constant speed. This includes railroad locomotives and power generators in plants. Number 4 diesel has a higher density of 59.9 lb/ft3 or 8 pounds per gallon.

Biodiesel B5 is composed of 5% biodiesel and 95% regular diesel. Not to be confused with renewable diesel or green diesel, biodiesel is regulated by the ASTM D6571 standard.

Hexadecene (C16H32) or cetane is a highly viscous alkene used in diesel, and the cetane level of diesel is closely related to its overall weight.

The minimum cetane number in Europe is much higher at CN 51 than in America, where the ASTM D975 standard requires a minimum cetane rating of only CN 40 for number 1 and number 2 diesel.

The typical cetane number found in most states is around CN 42 to CN 45, although in New England and the Mid-Atlantic states this has been raised to CN 50 by the Ozone Transport Commission. California requires that diesel have a minimum cetane rating of 53.

The ASTM D287 standard measures API gravity, a standard established by the American Petroleum Institute to determine the weight of petroleum relative to water. This also directly correlates with the energy level of diesel; the higher the API, the lower the energy.

The agricultural supply cooperative Gromark, in Illinois, reports that standard number 2 diesel fuel usually has an API gravity between 32 and 34, which converts to a specific gravity of 0.8654 to 0.855 (source).

A higher cetane number results in higher API gravity and lower density in fuel when achieved through the refining process.

High cetane fuel has a rating of 36 to 38 or a specific gravity of .8448 to .8348. In this case, the higher cetane number actually means fewer BTUs, less horsepower, and less fuel economy. It does, however, produce a lower weight range of 7.04 lbs to 6.95 lbs.

Is a Canadian Gallon Heavier than a US Gallon?

While a number of websites report that a Canadian gallon is greater than a US gallon, Canada began to move away from the Imperial system of measurement to the metric system in 1970.

Instead of measuring fuel in gallons, they have fuel listed in liters. There are about 3.78 liters to a US gallon, and 1 liter of diesel weighs about 1.83 lbs.

There were Canadians who resisted the conversion to the metric system and still used the Imperial gallon for many years after.

It’s still possible that you might run across a gas station in Canada that lists prices in gallons, but it will be hard to know offhand if they’re referring to Imperial gallons or US gallons. It would make sense for a business-savvy station along the US-Canada border to list prices per US gallon.

If you’re not careful, though, you could be taking on more weight than you intended if they’re using Imperial gallons. The weight of an Imperial gallon of diesel with an average density of 51.84 lb/ft3 would be 8.29 lbs. At 100 gallons, that could be a difference of 133 lbs!

Fuel standards in Canada are determined by the Middle Distillates Committee of the Canadian General Standards Board. These tend to favor the European EN 590 standard and the higher cetane number.

With a higher cetane number, the weight of a US gallon of Canadian diesel will probably weigh less than a US gallon of standard number 2 diesel with a cetane rating of 42-45.

What do 100 Gallons of Diesel Weigh?

The most common rule of thumb for truck drivers is to estimate their fuel weight at 7 lbs per gallon. For example, a tank carrying 100 gallons of fuel would contribute about 700 lbs to the truck’s overall weight.

The number would be fairly accurate for number 2 diesel, but number 1 diesel at 7.3 lbs per gallon would be closer to 730 lbs. That extra 30 lbs could be the difference that determines whether or not you get a ticket.

While you do not have to have a CDL to operate anything under a class 5 truck, these vehicles do weigh over 10,000 lbs and may be required to check-in at weigh stations.

Typical fuel tank sizes include 45 gallons, 75 gallons, and options that include a dual fuel tank combined capacity of 115 gallons.

In most states, busses are not required to go through weigh stations. But in some states, like Pennsylvania and California, they do (source).

A coach is a type of bus used for intercity transportation, while transit buses tend to be regional or intra-city. The most well-known example in the US is the Greyhound bus. Greyhounds have a fuel capacity ranging from 185 to 220 gallons.

Ninety-four percent of school busses use diesel, and a school bus can carry between 60 and 100 gallons of fuel (source).

Supply chains throughout the country—especially in the wholesale, manufacturing, and construction sectors of the economy—rely heavily on tractor-trailer truck drivers (source).

Class 8 trucks are above 33,000 lbs, and they are the most common vehicles used for commercial trucking. Class 8 diesel trucks usually carry saddle tanks, which are two fuel tanks mounted on either side of the truck for balance.

Truckers like to have about 31,000 lbs on their drive axle to give them 3,000 lbs to spare. That’s more than enough for rigs with tanks that hold under 300 gallons.

On the classic trucks with a sloping nose, the fuel tanks are shifted more toward the steering axle under the cab doors and will distribute their weight there. On long-hood trucks, the tanks are further back and the weight will tend to be more on the drive axles.

Sulfur has a comparatively high specific gravity at 68°F (20°C) between 2.07 and 1.97, meaning that the lower sulfur levels also contribute to the decreasing weight of diesel.

Both number 1 and number 2 diesel come in S15, S500, and S5000 variants with the number representing the sulfur level in parts per million (ppm). As environmental concerns have grown, the higher-sulfur variants are being phased out.

Green diesel or renewable diesel is “green” in the sense that it is clean, renewable, and environmentally friendly. Green diesel is produced from non-fossil resources and its chemical structure differs from methyl-ester biodiesel (source).

Green diesel has very little sulfur and has an even higher cetane level than ultra-low sulfur diesel (source). Honeywell International, with its headquarters in North Carolina, boasts that its green diesel has a cetane rating between 75 and 90 and sulfur level less than 2 ppm (source).

The price of natural gas is much lower than that of oil-based gases, and companies like Shell are interested in the possibility of converting natural gas into diesel to make healthy profits (source).

While gas-to-liquids plants are expensive to build, access to an adequate supply of natural gas can make the investment more attractive.

The largest gas-to-liquid plant is owned by Shell and Qatar Petroleum. Pearl GTL is projected to produce the equivalent of 3 billion barrels of oil over its lifespan from the North Field of the Arabian Gulf (source).

Other companies are experimenting with using compressed natural gas (CNG) and liquid natural gas (LNG) as replacements for diesel fuel. Currently, these alternatives are still not as fuel-efficient as diesel with a gallon of diesel producing the same energy as 1.7 gallons of LNG (source).

Compressed natural gas is lighter than air, being composed of high levels of methane. Liquefied natural gas is cooled to liquid form in order to reduce its volume and increase the amount of fuel a vehicle can hold. As a result, LNG fuel is preferred for heavy-duty NGV trucking.

As the requirements for diesel are being raised due to environmental concerns, the weight of diesel per gallon has decreased to a little less than 7 lbs at 6.94 lbs. In areas that still use a lower cetane rating or have higher levels of sulfur, diesel will weigh a little more at 7.09 to 7.30 lbs per gallon.

The common rule of thumb for truck drivers of calculating fuel weight at 7 pounds per gallon still holds true for the most part. In colder weather conditions, it would be wise to calculate the weight as a little over 7 lbs per gallon, especially if the diesel you’re using has a cetane number below 50.